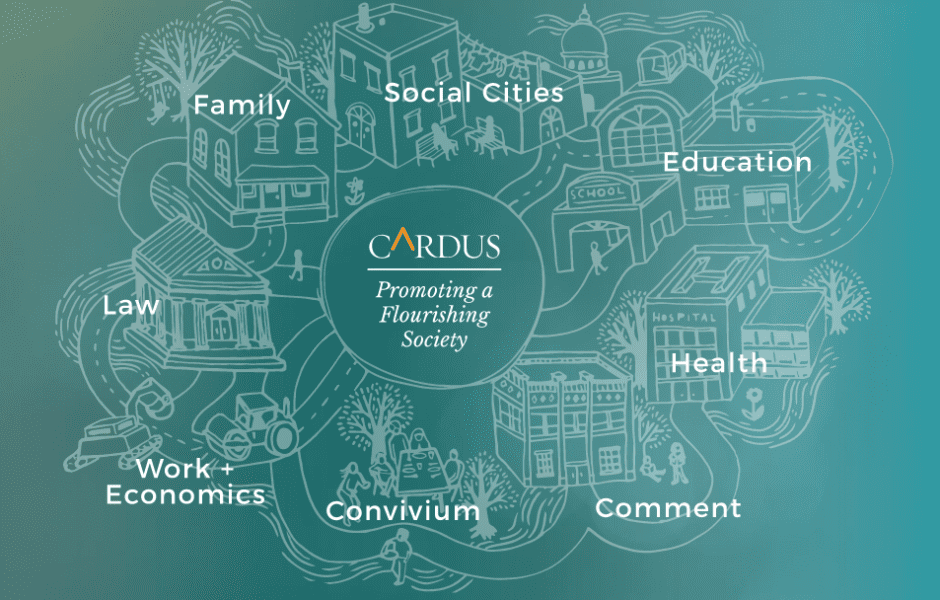 Cardus is a non-partisan, faith-based think tank dedicated to promoting a flourishing society.

“Initially founded in 1974 as the ‘Work Research Foundation,’ Cardus emerged from a desire to translate the richness of the Christian faith tradition into the public square for the common good,” states the Cardus website.

“Reimagined in 2000 as ‘Cardus,’ our team—Michael Van Pelt, Ray Pennings, and a dynamic group of experts—has spent over twenty years studying the institutions, communities, beliefs, leaders, and intricacies of civil society that collectively compose the social architecture of our common life.”

Cardus has over 30 staff at their main offices in Hamilton and Ottawa. Their team of experts includes those with former roles in politics, like Dr. Andrew Bennet, Canada’s first Ambassador of Religious Freedom, or those from the academic and policy backgrounds, like Marisa Casagrande, Cardus’ Senior Researcher.

As a research institution, Cardus investigates and produces literature on key issues facing Canadians. Their goal is to facilitate robust public dialogue and create thought-provoking commentary on subjects like family, religious freedom, city planning and education.

In the philanthropic world, it can be challenging to understand the significance of this kind of behind-the-scenes work. It operates on the other end of the spectrum of the charities that offer triage support in a crisis. While their labour may be harder to see, it is just as important.

Cardus works to tackle the higher-level systems and structures that impact our everyday lives. The issues we see on our street corners can often be traced back to policies and laws that in some way prohibit human flourishing. Cardus’ policy advocacy petitions the government to solve social problems in ways that are congruent with a Christian worldview.

One tangible example is Cardus’ work on the issue of payday lending. Payday loan shops often leave the poorest of the poor stuck with unmanageable debt. Loan shops that prey on people with little access to capital and low financial literacy are in conflict with the Christian ethic, which tells us to care for the poor and marginalized in our midst. In response, Cardus has been working with the government and the financial sector to limit usury and encourage healthier banking alternatives.

Since 2016, Cardus has produced six reports on payday lending. These reports have been instructive for governments as they tackle the negative social impact of the payday loan industry.

“It has been one of those occasions where our work, the timing, and the policy discussion were occurring at the right moment,” says Brian Dijkema, Director of Work and Economics at Cardus. “Our first paper, and the one that has the deepest dive into the research on payday lending and the market as a whole, is Banking on the Margins.”

Cardus advised the Ontario and Alberta governments as they crafted new regulations for payday lending. When Manitoba, Nova Scotia and New Brunswick were revisiting their provincial regulations, Cardus provided information and research to help them.

Cardus also graded the provincial governments on their response to the issue. Recently, they circled back on their analysis to see if their assessments and predictions were accurate.

“For the most part, we were right. We said the challenge with payday lending is not so much the interest rate. It is expensive, but the bigger challenge is the fact consumers must pay it back all at once,” says Dijkema.

Dijkema explains that if you are short $300 cash and you have to take out a loan, having to pay that back with rates of $21 per $100 borrowed ($363) is a lot of money, but lowering the interest rate to $15 per $100 borrowed like Ontario did, only makes an $18 difference. While that difference matters, it is not as significant as having to pay the entire loan plus interest back at one time. Cardus recommends policy interventions that would not only cap the interest rate but also allow people to pay back the loan over a longer period of time.

In addition to regulating the loan terms, Dijkema has been advocating for healthier banking alternatives for people with low social capital and little access to cash in the large banks. Cardus wants to see a partnership between government, charities, and financial institutions to provide funds for loan loss reserves which will encourage innovation in the small dollar market. They want to see consumers protected while still having access to credit.

This is just one example of many where Cardus is working at the policy level to respond to social issues in a way that is consistent with Christian values. In the insightful video series, Poverty Cure, Michael Fairbanks of Harvard University puts it perfectly: “Having a heart for the poor isn’t hard, we all have that. But having a mind for the poor, that’s the challenge.” In this instance, it is precisely Cardus’ mind for the poor that we value so much.

To learn more about Cardus and their various programs, visit their website or connect with us at info@charisfoundation.ca.